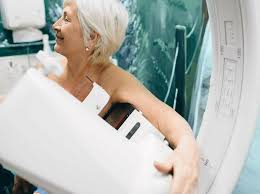 One unanticipated consequence of the COVID pandemic has been the postponement of screening mammography for virtually the entire population of US women who are candidates.  Mammography centers are opening again, now with a large backlog of women to schedule.  It is anticipated that there will be a delay in diagnosing breast cancers in some women as a result.  For most women, the delay will not likely impact prognosis, but there will be a subset of women for whom the delay may result in a higher stage of cancer at diagnosis.

If a woman completely stopped doing screening mammograms, then the only method of diagnosis would be from symptoms, either a lump, or perhaps some nipple discharge.  Even though there would be a delay in diagnosis, the treatment and outcome would probably end up the same for most cases. But for a small subset, the cancer might have spread by the time these symptoms lead to the diagnosis.  And the treatment for a more advanced cancer may need to be more aggressive than if it had been detected earlier when it was smaller and not symptomatic. Though one cannot predict who might get the more advanced cancer, there are still some legitimate reasons for choosing not to do screening, particularly for women who are in their 70’s or beyond.  This article is directed to those women.

First though, let us again define what a screening mammogram is and what it is not.  If there are any breast symptoms, such as a lump, or nipple discharge, or pain, then the study to be done is a diagnostic mammogram, which is a more detailed set of imaging, designed to explain why the symptoms are present.  This will no doubt include the set of films done for screening, but the point is, these studies are done as part of a workup for the symptoms, when they present.  A screening mammogram is done on a schedule, whether annually, or every 2 years, not because of any symptoms.  If you have any symptoms, they should be evaluated promptly, regardless of age, and rather than waiting until it might “be time” for a screening.

There have been many large studies through the years that have investigated whether screening mammograms make a difference in outcomes for women.  It might seem intuitive that it would, but it’s actually complicated.  Suffice it to say that most studies have shown a benefit in long-term survival for women if they get screening mammograms, but then there are the details, that are not universally agreed upon.  At what age do you start, how often do you get them, what specific imaging should be done?  And one more detail that has not been studied as much is, at what age might a woman stop getting mammograms? 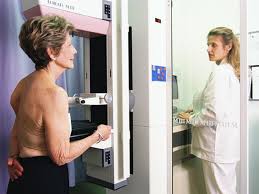 I have patients well into their 80’s who are determined to keep getting their annual mammograms, no questions asked.  It’s become a ritual, that for them indicates they are taking charge of their health.  But is it necessary, or is it perhaps even harmful in some way?  Let’s talk about that some more.

As I mentioned above, studies, such as this recently (online) published one, have shown an improvement in overall long-term survival, say 10 or 20 years.  Most, or all of the studies excluded women over 70 or so.  Why?  Because older women are more likely to not survive 10 or 20 years, because of “competing causes” of death, such as a stroke or a heart attack, or some other cancer.  So there are no studies showing a survival benefit in screening for older women. Also, even if a breast cancer is diagnosed because of symptoms rather than on screening at an earlier age, most women can be treated and go on to live out their life until they die of some other cause despite being diagnosed with a breast cancer.  To put it bluntly, the older a woman is, the less there is to be gained from screening.  This fact is understood more intuitively for screening colonoscopy, which is not recommended beyond the age of 70.  This recommendation against further screening has similar logic.  I believe it probably seems more intuitive, because the recommended screening colonoscopy interval for most people is only every 10 years, as opposed to annually or every other year for mammography. 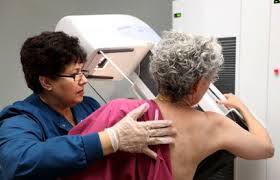 So when should we stop the screening?  One could come up somewhat arbitrarily with a specific age to cover the entire population, but since not all women “age” the same, it is probably better to take some individual factors into account.  A recent guide published by the University of California in San Francisco does just that, and it is available to anyone who chooses.  I would highly recommend the use of this personalized tool for any woman aged 75 or above.  There are two versions, one for ages 75-84, and one for women age 85 and older.  You will be asked to answer questions about your general health and will have the opportunity to draw your own conclusion. The guide can be downloaded to take for discussion with your own physician as well.

We are here to help with such decisions.  If you would like to have a comprehensive breast exam, and discuss your personal screening mammogram decision, click here to contact us.  Or call our office directly for an appointment at 404 508-4320.